The Suzanne Vega School of Writing - - I'll Have What She's Having 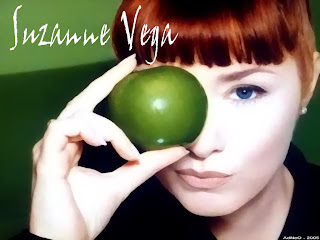 I admit it -- I have a place in my heart for Suzanne Vega. Of course, I'm not the only one. At the last check, she had 56,000 and counting Facebook Fans, no surprise there. Her social media updates there and on Twitter are snappy, congenial, and surprisingly upbeat for someone who has written her share of melancholy tunes.

Back to the place in my heart...I first saw Suzanne in the west village, in 1988 or close to it, at Folk City, which now no longer exists.  I was with someone I would be breaking up with shortly thereafter, but one of his greatest legacies was taking me to Folk City! Ironically, a song she wouldn't write until 20 years later, "Frankie and Eva," sums up the relationship pretty well: "It's not enough, to be in love..." - you get the idea. Many of her love songs, or love gone wrong songs she sang that night resonated all too well, so perhaps in her own way without realizing it, she helped clarify our demise. But this is what great artists do.

I remember her seeming rather small on stage, and a little bit overwhelmed by her guitar, and the lights, and the audience, even though it was probably one of the more intimate venues she would play.  She had no band, only what I believe may have been a mogue synthesizer.

As she sang songs like "Small Blue Thing" and "Marlena on the Wall" and "Neighborhood Girl," I became an instant fan, buying her albums over the years and marveling at how a folk rock singer could skyrocket to the kind of musical stardom she earned with songs like "Luka" and "Tom's Restaurant." I was captivated, and still am, by the simplicity and yet power behind her lyrics. From a writing stanpoint, any creative person can take a lesson in economy of words, just by sitting for an hour or so with, say, "Beauty and Crime," which captures post 9/11 New York so well...

New York is a woman she will make you cry
To her you're just an ordinary guy...

Vega embodies in her powerful lyrics and contagious melodies and rhythms, what real writing is: pairing your ideas down to their most precise form, translating experience, and using people, places, and things, as inspiration.

Vega also shows enormous resilience. Dropped by her record label in recent years, she is re-recording all her songs. I was fortune enough to catch her show this winter at the Palace of Fine Arts, (my husband got the tickets -- he gets it) and I have to say, it was like coming home again. To 1988, 1998, 2008, and beyond.  I am convinced that we can all probably trace a Suzanne Vega song to some significant moment in our lives.

I was captivated by the sneak preview she performed from her new show playing in New York, "Carson McCullers Talks About Love," which showed a new and different side of her -- a little more theatrical, and with a willingness  to take on "her take" on a literary icon. We should all have such creative moments inspired by those we resemble in real life! (I've been told I look like Sally Field, but...)

So, thanks to Suzanne for the years of artistry she has shown, and for her resilience, and for being such a great writer that with a handful of words, you know just what she's trying to say.  I am now thinking a lot more about Carson McCullers then I normally would.  I remember that I read "The Member of the Wedding" in 8th grade or so, and that I was so moved  by it that I never thought the same way again about belonging.