Emotions in Business and Life - Learning to Let Go 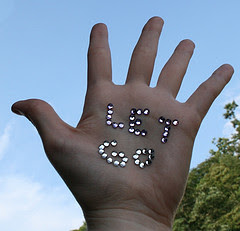 A client I was recently working with was finalizing her business logo. I suggested she narrow it down to 2 designs, and she could post them on Facebook with a poll or a request for opinions. In that way, her community would feel like they were involved in her activities and that they had a say in the final scheme of things. Or at least, final as far as the logo went. She responded that she was too emotional about it, and made the decision herself. OK, I said, but business is business, and maybe one need not be so emotional about something like a logo. Making money and being solvent - or sustainable -- connecting with people, fulfilling your passion, yes, these are emotional issues.  Are you sure it's the logo you're emotional about? I asked her. I didn't think it was, but left it at that. It was unfortunate that the business owner lost out on an opportunity to share. Opening up decisions to the "crowd," has been a successful marketing tool from the likes of Starbucks, The Gap, and many others, not to mention the countless bloggers I've received posts from asking for feedback on their new design. I wished for her sake she had learned to let go.

A friend of mine recently unsubscribed from my newsletter.  I had a rather small, and indeed emotional reaction to this, and determined then and there to unsubscribe from hers. I could not find the opt out, so I emailed her a note to remove me, and highlighted my disappointment. I heard back later that day that she was planning to subscribe again, but had only been closing out that email address. I felt ridiculous, and wrote her a nice note back, apologizing. Everyone has reasons for doing things, and I shouldn't have jumped to the conclusion that she felt my newsletter wasn't for her. Why did I care so much, when I had, and have, over 100 happy subscribers? I should have let it go.

I met a woman about a year ago at an event for writers. She had been working on a novel, and confided in me casually over appetizers, that she had spent about 5 years writing nearly 200 pages, and had recently dumped them all. In the garbage. Pressed the delete button. She was so casual about it all, it was as if she'd been talking about something she'd spent an hour on, or  a day. Just the thought of it made my stomach turn and my head ache. Five years. 200 pages. And there she was, munching happily on a deviled egg, making plans to start over soon. On the whole thing.
She had learned to let go. Good for her.

We visit the ducks in our local park nearly every day. Every spring, there's a cluster of baby ducklings that suddenly appears. They waddle in the water like tiny balls of fur with webbed feet, and their mother watches over them every moment, for weeks on end. They cross to the other side of the pond, and she's right there after them. They cluster under a rock, and she's standing guard. And then suddenly, once they're only a bit bigger then they were, they are on their own. There they are on one side of the water, with their mother on the other, with only the faintest suggestion of a connection between them. It's sad, but also somehow right. They all move on. It's part of nature.

What have you not let go of yet?

Email ThisBlogThis!Share to TwitterShare to FacebookShare to Pinterest
Labels: logos, starbucks, the gap