10 Business Lessons from the Oscars 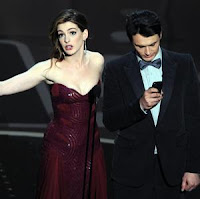 I wondered if I was the only one squirming during the Oscar's broadcast, and observed the next day that indeed, I wasn't. The pairing of Anne Hathaway and James Franco was tenuous at best, with publications like The New York Times' David Carr commenting:


"Can’t say the same about the hosts, who were really a host, namely Anne Hathaway. She gamely soldiered along while James Franco did, um, what exactly? Mr. Franco tweeted about doing the Oscars, made movies about doing the Oscars, gave many interviews about being a host, but when it came time to do the actual Oscars, he entered the witness protection program."

It became obvious after about five minutes that while she was light and bubbly and the apparent master fixer of awkward silences, he was stiff, uncomfortable, and seemed as if he'd be happier out mountain climbing, preferably without getting his arm stuck in a rock, but not necessarily. Speaking of arms, it was painful to watch her try to cozy up to him and put her arms around him, only to see him standing practically with his back to her and looking off into some faraway horizon. Even transgender costumes and awkward musical numbers couldn't save these two, and clearly, no one was buying in.

And it wasn't only about the hosts-- we had the winning actors, producers, and directors, scoring big points as usual when they were clever, witty, and succinct, and conversely, causing ennui and discomfort when they exceeded their boundaries and went on and on, past their allotted time and stretching the edges of relevancy. In this age of social media and quick messaging, we become irrelevant when we take more than one minute to say anything, even at the Oscars.

Other awkward moments included Jennifer Hudson looking as if this were the first time she'd seen her cue cards, and the finale sing-a-long (or not) from the fifth-grade chorus from P.S. 22 in Staten Island singing “Over the Rainbow.” This seemed odd to me. Why American Idolize the Oscars, and why be so painfully obvious about trying to bring younger viewers in? If you really want to build a bridge between the arts and future generations, how about highlighting a movie made by teens that would resonate to large audiences. There's a medium specifically for that these days-- I believe it's called "YouTube."

So in the interest of succinctness, here are my concluding Business Lessons from the Oscars:

1. You Can't Force Chemistry, so don't try
2. Be Succinct and Relevant
3. Greatness Does Not Always Transfer to Other Skills -stick to what you're good at
4. Practice Public Speaking and don't look confused in front of the audience
5. Don't Act Too Shocked when getting the recognition you deserve - you've been waiting all your life for this moment and everyone knows it
6. Forgetting to thank the right people at key moments will haunt you, probably for the rest of your life
7. Don't sing if you--well--can't
8. Practice Smooth Transitions
9. Acknowledge the Past and the Future, but don't wallow in them
10. Don't be Petty - it's unattractive and won't get you anywhere

Please feel free to comment here. What were your thoughts on the Oscars, and do you think they represent any business or life lessons?