Animoto Gets Even Faster, and Check Out Michael Arrington's Vid 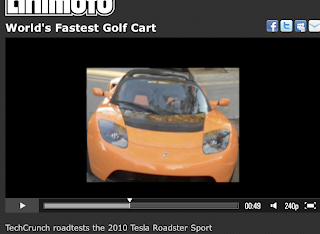 I've been a fan of Animoto for some time now, so I was thrilled at the news that the processing time for videos is now going to be even faster, according to Tech Crunch:


"Animoto has sped up processing times by 10x, they say, largely by upgrading from Amazon’s AWS to Amazon’s AWS GPU Instance. They’ve also increased maximum resolution from 480p to 720p. Base resolution increases from 240p to 360p."

This should prove as a huge boost for Animoto, as in the past the only critique I've had of this photo and video processing software is that the processing time can run a bit long, particularly if you have a premium account ($30 a year), which allows you to upload multiple images and clips, versus the free version which allows only for 12 images. Animoto is a real timesaver for those who want to make quickie promotional style  videos and don't want to spend time on video editing. Even YouTube uploads via the Flip can take a while  -- Animoto lets you share right away with Facebook, YouTube, and many other social sharing sites.
I suggest you check it out if you haven't tried it yet. Also, it's a great timesaver for finding royalty-free music, as all the music upload options are cleared for takeoff. This saves video makers from having to search for music they can use, or from having to create their own. It's also fun to try out the re-mix option, which creates entirely new "treatments" of the same basic elements of video, text, and music. It's as if your video is being reinterpreted.
One note of caution: I would note  use Animoto if you have a fair amount of text, or a slide show style presentation, as its templates only hold limited text. The program works much better when the graphics are the focus. However, if you have overall categories you want to represent, such as, for example, FOOD, MUSIC, PEOPLE -- that kind of thing, it works great, as these are one-word screens.
Have fun, and comment here on your experience.
My Related Blog Posts on Animoto:
10 Tips to Getting Started with Animoto
Animoto Lets You Create Your Own High Tech Video
How Do You Tell Your Story? 3-Part Series of Video Test Runs