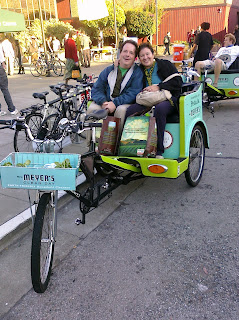 I was reflecting on happenings of the past week, and realized that quite a few turn of events surprised me. They were a combination of larger and smaller incidents, some relating to business and social media, others relating to life in general, or as I otherwise like to call it: "slice of life" stuff.

*Time On My Hands
I was surprised that I won a raffle at the SF Green Festival at the end of a really great session (more on all that to come later this week, along with some great photos). The prize was a Sprout watch, made of all natural materials and very light and comfortable to wear. I researched the company briefly when I got home, and found that every component of the watch is sustainable, including the packaging, the straps, the battery, the watch face, everything. I had really stopped wearing a watch over the last few years, since I'd gotten into the habit of just checking my cellphone. Plus, the only watches I owned were a fancy Swiss one I had received for my college graduation that I saved for special occasions, and a Mickey Mouse watch from Disneyland that seemed more palatable on fake Main Street USA  than in real life. But when I put the Sprout watch on, I felt more official, somehow, like I was in charge of something (or someone?) new. Nothing like a new watch to make you feel like a grownup, just in case you were thinking you could fool everyone and revert to childhood just 'cause you felt like it.
I guess the quote on the side of the package really drove the point home:
"Time is something that once lost, can never be found again."

Lesson: Thank you Ben Franklin, you always know what to say. (And of course, thank you Sprouts!)
*A Disappointing Launch
A blogger and social media-ist that I am a huge fan of, launched a somewhat lackluster new website. I kept looking at it and wondering why it wasn't engaging me, since I was naturally interested in the content, and it seemed on paper, or rather onscreen, like a great idea. On sitting with the site further, I realized that the publisher was asking for a monthly payment--not a huge amount of money--but nowhere on the site did it indicate specifically what the user would receive for the payment. There was a lot of copy about particular individuals involved in the site and how their backgrounds were so amazing, but no specifics, or free downloads, or blog posts, on this topic, so that it seemed the publisher was relying on past publications or sheer audience loyalty, to get this site off and running. I was super surprised at this, since this publisher has always been the most methodical and careful of communicators, and yet I have to say, this site really felt like a rushed project. I hope that it works itself out, and that more value added is included in the website copy, because the premise of the site is really great.
Lesson: Membership sites are cool, but don't launch until you're ready, or else be prepared to deal with a lot of reader feedback, not all of it good.


*The Case of the Disappearing Blogger
On a similar social media note, a blogger I really like seems to have completely disappeared. She had been blogging every day for over a year, and suddenly stopped. She did publish a post recently, though, explaining that she'd been really busy with projects, and that no one should be worried about her, but that she'd post again once she had something to say. My problem with this is that I think if you have a blog, you have an obligation to your readers to publish on a consistent schedule, no matter how busy you are. If you have a lot of  projects, that means you have income coming in, so you could, for example, hire someone to ghostblog for you. Or even if you don't have so much income coming in, you could hire an intern to do it. I just don't think it's right to poop out on your blog--it implies that your readers aren't important, and in this day and age when writers and publishers are competing for attention online, you shouldn't take your audience for granted. Besides, if you're in a hurry, you can always run a blog contest, or publish photos, or some quick links. It's not rocket science, but it does have a lot to do with online credibility, a topic I believe this blogger has posted about.
Lesson: It can take years to build up your blog's and brand's credibility, and only a few weeks to mess it up.


*Write About Something "Nice?" I Don't Think So
In applying for a new project, I was asked to write a paragraph about something "nice" that had happened recently. So what's wrong with this? Nothing, really, except that I was getting over a head cold, and had just finished two hours of questioning, and had a very clear and easy to find portfolio of published feature articles from magazines liked Redbook and American Health, all nicely organized on my website, so this request just appeared -- well -- ridiculous and yes, surprising. I came up with something I rather liked, but nonetheless, I felt myself squirming in my seat like I was in 4th grade again. Why did I have to prove that I could write about something nice?

Lesson: It's nice that I won't be writing for the people who wanted me to write a paragraph about something nice.


*Come Together...RIght Now...Over Him
I attended a party and fundraiser in the Mission District that turned out to be a wonderful celebration and a great surprise.  It was also very humbling, as I learned halfway through the evening that the event was to support a woman's brother, who had just been diagnosed with a brain tumor. So didn't I feel silly when I (ok, I admit it) I kind of complained earlier on that they were running low on the Brie cheese, which I had determined was my favorite.
Lesson: Illness dwarfs just about everything else. I am now kicking myself, seriously.


*Not Just a "Linked In" Your Chain
I had been getting a little frustrated with Linked In. I'd been trying to follow my own social media advice for a while, by participating in discussions, answering questions, etc. Finally, discussions I started seemed to have some traction. I posted a link to my recent tips for key action steps to take at conferences, and got quite a bit of discussion going: people really seem to value networking at events, and that was the common theme. Then somehow, my Granola Marketing blog post that I had posted to my Oberlin Linked In Group, got reposted, and a swirl of comments surfaced about how folks remembered co-ops and their baking days. How cool was that.
Lesson: Common food experiences will always strike a chord. Must be the whole Proust "madeleine" thing.
*The Mysterious Package
We received a FedEx delivery slip that a package is on its way and will be redelivered in a few days, signature required.
OK. We are not expecting a package, so this is indeed something I would categorize as a "surprise." Now it is 1:22 am, and it's kind of keeping me up because I am curious about said package. In fact, I may not sleep until the package is redelivered, which could be over 48 hours from now. This is not good, as I just read an article that lack of sleep can cause reduced sensory reactions, among other things. Stay tuned, as after all this, I'll probably write about the package once it's delivered, just to get it out of my system.
PS Is it a FedEx box, do you think, or just the letter-size package? Hmmm...
Lesson: If I can't get the package delivered right away, I don't even want to know about it. Let's just talk about the weather.
*Best Surprise of All: Unexpected Pedicab Ride in
Downtown San Francisco
See photo.
Lesson: Don't underestimate low-tech.
What say you? Any surprises in your life lately?