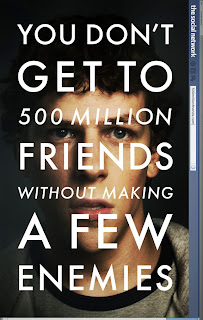 OK, so after all the hype and buzz and previews and reviews,  I had to go and catch The Social Network for myself. I just had to see how Sorkin and Fincher made drama out of hacking, coding, ranting, shmoozing, law-suiting, carousing, and swimming pool sliding, while all the while the wondrous Facebook child was being born, complete with all the features we know and "Like," including the creating of the Wall, the addition of one's relationship status, and the rapid spread of Facebook from college campuses, to Europe, and the universe.

1. Zuckerberg's Image not horrendous. I expected the film to cast Mark Zuckerberg in a  bad light, particularly since the movie's opening was coincidentally timed with his donation of that large check to charity via Oprah, as if to say, "I'm not such a bad guy after all."
Not So. In fact, the movie made him seem nerdy, alternately obsessive and unfocused, brilliant with machines and lousy with people.  OK, he was self-absorbed, fairly rude, and emotionally and at times morally out to lunch, but he did try to "connect," which is more then I've seen in a lot of people. He was also shown to be genuine about righting certain wrongs.

2. Limited Facetime. I expected the film to show more of the user experience, as the platform developed from "The Facebook," to "Facebook," and the evolution of its features we know today came into being. I wanted to oooh and aahh a bit more, as I experienced the revelation of Facebook along with its creator, a collegiate Frankenstein in flip flops and ratty t-shirts, creating a social media monster.
Not So. Outside of a few key moments that relate to the plot more than anything else, and some bouts of drunken coding, the rise of Facebook is reflected in the growing number of users frequently alluded to, and the details that emerge about Facebook's valuation by investors during the deposition scenes that frame the movie. It's not a film where see people sitting in front of their screens doing a lot of scrolling, liking, and updating. Except at the end, but I won't give that away.


3. No Girlfriend? From what I'd read, and particularly what I'm reading now in David Kirkpatrick's excellent book, "The Facebook Effect," Zuckerberg's girlfriend was around all the time, particularly once he has made the move from Harvard to Palo Alto.
Not So. No girlfriend, but a big date, and he still never seems to get over the breakup with Rooney Mara that kickstarts the movie's opening.

4. He Had Me at Appletini...Justin Timberlake rocked. I wasn't sure what to expect from JT, having only seen his acting stints on SNL. But he really rocked the Napster creator Sean Parker role, bringing a new classiness to sleaze (if that's possible), until he went too far. At least that much was a lesson learned. He truly held court during the "appletini scene," one of the few where Zuckerberg was clearly blown away by someone other then himself. What restaurant was that, anyway?


5. All's Fair in Love, Venture Capital, and Social Media. Not.  Maybe I was a little naive, but I thought the movie would make me feel inspired about social media, entrepreneurship, the American success story, even if it was a little rough and tumble.
Not So. I left the movie feeling mixed about success and concerned about its message, a little like I did when I saw "Pretty Woman." As much as I loved to see Julia Roberts climbing down her fire escape to united with Richard Gere, I could never rid myself of that oozy feeling inside, that the movie's message seemed to be: if you set out to be a prostitute, you could end up in a real relationship...with a millionaire, no less! Same thing here. Good people got taken adventage of, rules broken, ethics, if not out the window, certainly on haitus. This is entrepreneurship with fangs, and yes, it did get ugly.

The film should have had a disclaimer: don't try this at home. But then again, most people won't. They don't have the code.


Did you see it? What did you think?