The Granola School of Blogging: Part 1 of 2

Part One: A Sticky Situation 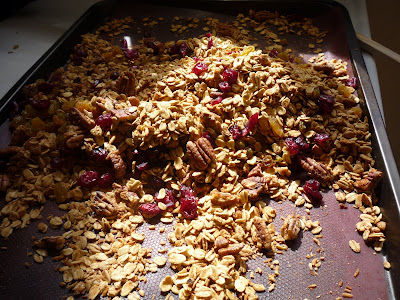 Every year at back to school time, I get the urge for granola. It comes upon me all of a sudden, and I absolutely have to get myself a box or a bowl of the crunchy stuff, pronto.

What, you may wonder, does back to school have to do with granola? Well...here's a little story. Back when I was a junior at Oberlin college, I had my first co-op experience, and was officially off the cafeteria plan. I was excited about getting onto REAL foods, and getting away from canned salad bars, graying veggies, occasional mystery meats, and processed desserts.

A requirement of being in the co-op was that you had to have a job. Jobs ranged from the coveted menu planner, which was regarded as rather cushy, since you didn't have to get your hands dirty --to kitchen prep, which I did one year, and could mean chopping up carrots for like 150 people. There was also bread baker, dessert maker, brunch cook, and clean-up crew -- just what it sounds like.

My first co-op job was granola maker. I don't recall how I got it, but I think the co-op president "appointed" me. Was there something about me that suggested granola? Who knew. It looked like fun from what I'd heard, plus, I cook it once and it would provide a huge can of granola, enough to last the week. Cool.

On my first official granola cooking night, I was fanatical about getting it right. I put on my official white apron, which was too big for me, so I looked like a giant marshmallow. I tried to make myself at home in the huge kitchen that I had all to myself, surrounded by long wooden countertops, oversize Hobart mixers, stacks of plates and glasses, and huge vats of supplies and canned goods, like whole tomatoes, tahini, pasta, tunafish. It was like "Land of the Giants," but with food. I put on "The Talking Heads" - "Stop Making Sense." Take me to the River...Drop Me in the Water...Someone had left me a "distressed" looking recipe card on the counter top, and I almost found myself looking for tape recorded instructions, like on Mission Impossible. Cue the groovy 70s music, the tape self-destructing in 30 seconds -- the mission, should I choose to accept.

So I started cooking up a storm. I whipped up the dry ingredients like Martha Stewart on steroids -- oats, raisins, and three kinds of  nuts, (almonds, peants, walnuts) from a huge storage room in the back of the kitchen, where I thought I might find hidden treasure if I hung out there long enough. Then to the wet ingredients: oil and honey, which I blended together in a huge pot on the stove that was about 500 times the size of my little hotpot in my dorm room that I used to make Cup a Soups. Next, I combined the wet and dry ingredients in another giant bowl, and after that -- I was on a roll by this point--spread the entire mixture out onto about 60 pans that went in the oven!

It took hours to fill the pans, and hours more to cook up the granola. I kept a watchful eye on the time, being careful to cook it all up just right. Finally, when I was done and all the granola had cooled, I was ready to scoop it all into the giant vat that would be used to store it all week. Only there was a problem ...it was stuck! In my frenzy to get the granola cooked and ready on time for the week ahead, I had forgotten a key direction in the recipe. I had forgotten to coat the pans with no-stick.

So there I was at about 4 am, with tons of granola and no way to share it because it was all stuck to the pans. By that point, I'd heard Pscho Killer like 500 times. Did I mention there were 60 pans? Exhausted and practically in tears by that point, I went back to my dorm room to collapse, sticky from all the honey and bits of oatmeal glued under my fingertips, my hair sticking up at all angles like I'd put my finger in the proverbial  lightbulb.

A few hours later, I got up again to try and salvage my project. There was no way to save the granola except to go into each pan with a knife and scrape out what remnants I could. This took hours, and most of the that Sunday. I barely collected enough for half a bin, but I couldn't make anymore. The pans were a mess, and had to be scraped and scrubbed individually, which also took hours.

The next day at breakfast, I nervously watched as people dug into the granola bin. No one seemed to notice there had been a problem, and they happily scooped and munched, some taking theirs in a baggie to snack on later. I even got a shoutout and a round of applause, although the cliche of co-ops was that people applauded over everything. You could sneeze and someone would applaud.
I was mildly relieved, and had also learned my lesson.  I would never again forget to coat the pans.

So what does all this have to do with blogging? I know I was destined to undergo this granola trauma in college so that years later, I could draw on the experience to create brilliant analogies for blogging. Check out Part 2 coming soon, where I will outline the Key Tips from my Granola School of Blogging.

My friend Nancy and I were the granola makers at Baldwin co-op in 1976-77. We delighted in coming up with a different flavor of granola each week -- maple walnut, orange spice, cinnamon apple -- use your imagination. However, my favorite story was the time we thought we were adding cinnamon to the yogurt, but it was actually CURRY. What a disaster. I have never again mistaken cinnamon for curry.

Thanks for your comment, Janis...wow, curry instead of cinnamon, that's a tough one! In addition to my granola stories, I also once used cayenne pepper on chicken salad, when I thought it was paprika. That was before Oberlin, however.

Believe it or not, Carrie, I'm making granola again after all these years(Baldwin Co-op granola maker, sophomore year). Jeff's co-author Zoe has a great recipe in "Artisan Bread in Five Minutes a Day," and it's a lot easier when you're only making one pan. And thank God for Silpat! Thanks for the memories.