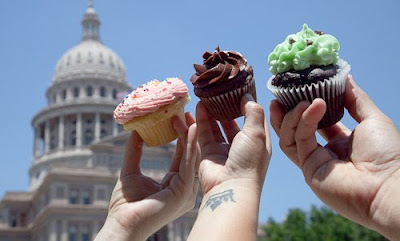 Over the weekend, I took a brief break from literary pursuits (like working on my next e-book and dustbusting the back of my car -- not necessarily in that order), to watch "The Food Network," which I hadn't seen in a while. It was "Challenge Night," which normally I don't like, since I tend to find it more stressful than enjoyable. But I have to admit, the Cupcake Challenge got my attention.

Four super chef contestants were "in it to win it." In the introductory sequences, the contestants were not shy. They all said things like, "I have to win this thing. I'm giving it my all. My competition better watch out." While they all started out strong, the eliminations started round after round, with the judges evaluating all kinds of things that one might expect: taste, presentation, creativity/originality, and relevance to the task at hand.

Here's where it got interesting. Most of the tasks required that the cooks make signature cupcakes to mark a big film gala in LA. So there was this movie theme. One chef with a lot of flair, made a fantastic looking cupcake that incorporated basil.  The panel agreed that it looked and tasted great, but "basil" did not suggest "movies." Therefore she was irrelevant and got disqualified.

In another task, the chefs worked with construction teams to build themed displays that would hold 1,000 cupcakes, with the winner's being showcased at the event that night. With two contestants left, one chose a complex theme park display that incorporated many levels and dimensions. The other used a very simple movie ticket concept, where an enlarged cardboard "mock ticket" was divided to showcase the 4 different kinds of cupcakes.

Guess which won? Yup, the movie ticket display, because it was relevant. The theme park idea was more complex and sophisticated, and even more interesting to look at it, but it did not reflect the movie theme, and the chef knew that going into it.

So my point is....Be Relevant in Your Business Life, but realize that it's not always easy.  You can spend hours on a great cupcake that no one wants, or 10 minutes on something different that everyone wants. Listen to what people, like your clients, ask of you, and produce their customized solution. You need to get outside yourself. Take a walk. Make lists. Do a survey. Cross stuff out and start all over again. It's part of the process. And in that way, you'll make it to the next round with flying colors.

Now, I'm off to make some cupcakes. And you?