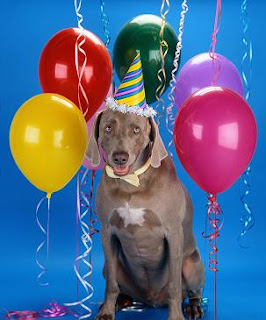 When I was 8-ish, I  had a birthday party and only about 6 people showed up. I won't tell you how many I had invited, but it was more than that. It was rather traumatic, particularly at first, when I remember waiting for the doorbell to ring and for throngs of classmates to descend upon our household. OK, that didn't happen, and I had to save face and make the best of it.

As it turned out, it went pretty well with the folks who showed up. We played Simon Says, and did cool creative things like glitter projects, and there was tons of cake for everyone! They were a good crowd, and they went along with the nifty party entertainment we had planned. They ate, they drank, gave gifts, and left, so by the time the whole thing was over, I enjoyed my Barbie with movable wrists, a doll that did pirouettes when you pushed her stomach in, and another who grew hair when you did the same. It was all good.

Of course, I went on to have parties after that, like in high school, where the opposite problem happened. Word spread, and people showed up out of nowhere, people that I didn't even know! Some of them were loud and noisy, and even started throwing stuff out the window. I thought back to my childhood birthday trauma, and found myself relishing that party where it was just a few good folks.

So, here's a life lesson on birthday parties and social media, now that I've had about 30 years to think about it...


1. You want "good people" to show up: good, meaning those who are genuinely interested in you, who want to have a good time at your "house," (blog, home page or similar) and who won't rush to leave. And of course, you are interested in them, that's why you invited then over...( friend, follow, etc.) Another way of saying this: quality not quantity.

2. Goody Bag Awareness: People are aware of the goodies you are offering for them to take home, such as free downloads, courses, books, etc., but they aren't only in it for that. They'll wait for the right time, and then go for it.

3. A Multimedia Experience is Always a Nice Touch: You and your guests will get a lot more out of your party if you throw in some surprises, like interesting images, video, and useful links. This makes you shareable.

4. Storytelling Counts: Guests will be more interested in you if you tell a good story, whether through text, photos, or video. Chances are, they'll have their good story to share with you, either through comments, linking back to you, tweets, or other social media sharing.

5. Being Funny Counts: I tweeted over July 4th weekend about how Mr. Pickett was consuming the remainder of the cherry pie. Mr. Pickett tweeted back that that was apparently not the case, and a brief online discussion ensured. I heard from a few Facebook friends that they found this quite entertaining. So being funny counts, particularly if you don't have to try too  hard.

6. You Can Dance if You Want To: What's a Party without Dancing? Just check out a viral video, "Where the Hell is Matt?" and see what I mean.

7. Be Interested in Other People: As mentioned in item #1, people can tell if you're just tooting your own horn, and they'll get bored in about 3 second if you go on about how great you are. Ask them what's new in their life? Have a 2-way or 10-way or 50-way conversation.


8. Appreciate Everyone's Different Styles: Not everyone is going to be the same, particularly in any given social situation. Some people might be long -winded and completely unable to say anything in under 10 minutes. These would be your nontweeting, long blog post and maybe even longer video types. Some might be so quiet they hardly say a word, and they let their cameras or videos or peers do their talking for them. Some people may be just plain offensive, or not so friendly, but you shouldn't write them off. If that's how they want to be and it works for them, then that is their brand. Leave them be.


9. Have a progression.If there's no order to things (like, say, your home page) and people don't know where to go first, there will be varying degrees of chaos. Rather, lead them along as you would through activities at a party.  Tell them about yourself with a welcome video and About page. Show them what you have to offer, and present a call to action. Take them through your rooms and show them where to sit. Interaction. Reaction. Engagement. Consumption. That kind of thing.

10. Dress up a little. Everyone appreciates it if you dress up a bit for your party, just as you want to look awake and alive in your video, and engaged in the photos that show you up on stage speaking.

Anything I missed? Feel free to comment. And now I'm off...suddenly I'm in the mood for a really good party.