In a Slump? Take Creative License and Go for A Drive 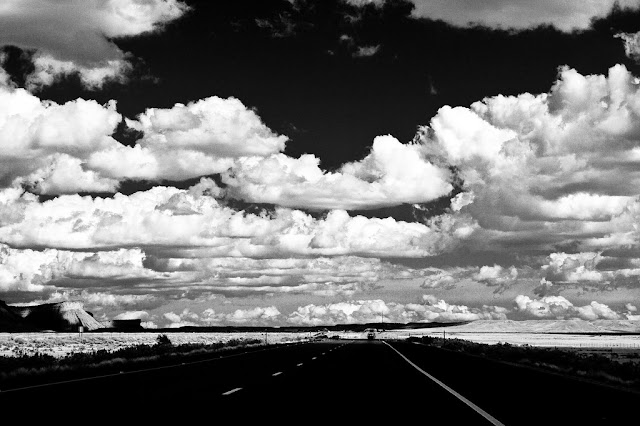 It has always somewhat amused me that driving has been a source of creative inspiration for me, since I learned relatively later in life then most (I was in my mid-twenties and never had needed to drive, growing up in New York.) Also, the circumstances in which I learned were a bit rough -- driving through severe weather with my learner's permit so that I would never be phased by bad weather (not my idea but I have to say it worked), and learning how to do things like shift years (oops - I meant gears!) on the George Washington Bridge, or change lanes on the Montauk Highway. Not relaxing.

Driving has in many ways marked rights of passage for me. Within the first few years I got my license, I drove nearly 12 hours from New York to Virginia Beach to run one of my first 10K road races; visited my college in Ohio (another 12 hours) to experience one of my first college reunions; driven the endless cycle of New England rotaries; and gotten to know America's major highways - 95, 101, 80, 495.  I've driven on California's famed Route 66, and most recently Route 12 through Sebastopol and Sonoma. I drove away from relationships that ended, and toward ones that were beginning,  like my wedding in upstate New York in the fall of 2002, in the pouring rain through the mountains.

It was in a car, when someone else was driving, that I wrote the draft of  short story that ended up winning a contest.

Driving in many ways gives you permission to awaken your senses a bit. Here are some of the things I enjoy:

*Play music and sing: I don't always make time for music when I'm working or in my everyday life, but in the car I dip into my collection of favorites, and anything goes: Travelling Wilbury's; Crosby Stills & Nash; Simon & Garfunkel; Fleetwood Mac. I also sing favorite songs, and though it may sound corny, they always put me in a good mood: "Country Road" by John Denver; "California Dreamin'" by the Mamas and Papas, of course; Joni Mitchell's "Both Sides Now."

*People watch: There's always a story being told somewhere, whether it's in the car next to you or at the store across the street -- the family picnicing at the beach, or the couple talking on the corner. Where did they just come from and where are they going next? Have they been here before? Do they look familiar?

*Enjoy the scenery: I've driven through perfect, sunfilled days, and the worst weather imaginable, including freezing snowstorms and days so hot I thought my tires would melt. But through it all, it's really the scenery that kept me going - a hawk circling in flight, or a snowy mountain range stretched along the horizon like a great white hand.

*Problem solve: They say a change of scene always does one good, and being in the car is no exception, even if it's just to drive around the block. I got the idea for my e-book, "6 Degrees of Twitteration," on a short drive, and also renamed my e-zine "The Butterfly," while driving to the supermarket.I've also gotten several blog posts ideas while waiting for the light to change, particularly at the intersection near my house, where lately someone in a giant duck costume has been drumming up business for the local car wash. Marketing post, anyone?

*Permission to Get Lost: There's a lot of pressure to stay on track in our everyday lives, but sometimes it's OK to give ourselves permission to get lost. Some of the greatest movies of our time have driving and the freedom of the road as their central theme. How about "Easy Rider." "Thelma and Louise." "Paper Moon."

*A Lot Like Social Networking: This probably wouldn't have occurred to me a few years ago, but the similarities to me now are glaringly obvious. If I'm driving around exploring, I'm looking at different communities and how I might fit in. Would I come back to visit? What are the people talking about, and what are our commonalities as well as differences? Can we learn from each other? Do the people there tend to circle around each other, or are they really engaged?

*Culinary Adventures: There's no greater time then being on the road to discover new food adventures, and to allow myself the occasional egg mcmuffin, cappucino, or barbeque potato chips.  I do not eat these at home, really.


*Being Brave: Unexpected events can happen on the road, and you have to make quick decisions. I've seen other drivers take huge risks, winding in and out of lanes on the highway as if there were no one there. I've seen bad accidents where no one walked away, and swerved to avoid hitting deer, cats, and dogs. It's a good metaphor for life. You have to get through it. You have to allow yourself the emotion, wheatever it is, and move on.

So that's a taste of how driving unleashes my creative side. So how about you? Has one of your drives ever been a right of passage as well? Tell me your great stories.

Editing note: I'm just back from an inspiring road trip, and therefore will be posting my Monday Marketing this Wednesday instead. Stay tuned.

I love your list of things you enjoy! Such a great metaphor, too. I plan to steal it and invite my clients to imagine life as a road trip, encouraging them to take to the highways and go offroad too! There's wisdom on the road, to be sure!

Molly Burke CPCC MSU
Queen of Confidence
www.lifepurposeworks.com
"Even before I begin, I am made of win!"

Thanks for your comment, Molly! Yes, driving makes for a great metaphor and I'm surprised I didn't think of it sooner. Good luck with your clients and feel free to "steer" them toward the blog post! (no pun intended....)

Hi Caroline, I could not agree with you more when it comes to finding inspiration on the road. I get some of my best perspective on vacation out of town in Lake Tahoe or Reno or just simply driving along a lone stretch of I-80. I think it is because scenic driving is a perfect distraction, allowing us to 'turn off our minds' and allowing intuition to come in on stuff we ponder in the back of our heads.

I wonder what kind of results we could get if we had a tour of people (i.e. "inspiration bus")!:)