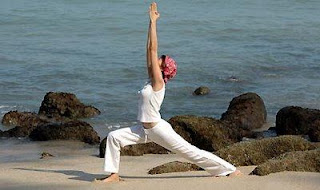 Over the weekend I attended the 7th Annual Yoga Journal Conference in San Francisco (video forthcoming), and while I learned a lot about yoga, I learned even more about some of the communications basics I hadn't thought about in a while.

I attended 2 intensive workshops, both of which were about 3 hours. That meant the teacher had an hour and a half class to lead, as well as about an hour and a half to...talk, yes that's right, talk. I have to admit that I really wasn't accustomed to sitting that long in a yoga class -- to just listen without moving. Ironically, this is what yoga in the end is supposed to help us do. Welcome the stillness.

Gradually, I overcame my temptation to drift, and in both workshops I noticed that the audience, some teachers themselves and the rest of us students, were quite transfixed by the instructors. We watched them, took notes, laughed at their funny anecdotes and validated their sadder stories. We thought about the ideas presented to us, created images when the seeds were planted, closed our eyes, opened our eyes, held onto the landscape of their life experience as they presented it to us. While all the while, we were to translate concepts for ourselves. Flexibility. Stability. Primitivism. Forms. Poses. And the famous chakras.

Of course, I started thinking about social media and writing, (you know me...), and realized that their actual classes notwithstanding, these teachers in their elocution had all the elements of what we find in power bloggers. In short, they did what we as bloggers need to do everyday to "validize" (I made up this word for now) our space and that of our audience. Here are the 5 lessons I learned from this experience, that really came out of nowhere, as sometimes the best lessons do:

1. Be Unique in Your Authenticity.

We've all heard about the importance of authenticity in social media, but it wasn't until I attended these workshops that I realized a deeper knowledge of what authenticity really meant. It wasn't so much about the fact that these teachers had originated their ideas, but rather that they had made them their own through their voice, style, and branding. They told a story the way no one else could. They used examples from their lives to illustrate a point, that only they could originate. When you read a really great blog post, or several, it's just that way. The blogger is not only conveying their authenticity, but they are doing it in a unique way.

The teachers conveyed a definite passion for their life's work. They convinced their audience that not only was there no other choice for them but to teach yoga, but one teacher even stated, "if I don't do my yoga everyday, the world is in trouble." Truly great bloggers also convey a similar sense that they are passionate about what they are doing. There is often an immediacy to their writing, even though they may have labored over their post for hours.

3. Know and Connect with Your Audience.

The teachers spent a great deal of energy making sure they were connecting and being understood by their audience before going on to a new idea or thought. One teacher repeated every few minutes, "do you get what I mean?" If there was the sense in the room that an idea was not clear, the teacher would rephrase her thought in some way until she sensed their was clarity. Similarly, great bloggers know their audience, and communicate in a way that they can make the best connection. That means knowing what words to choose that will resonate the most with readers, what kind of images will be the most powerful, and what style and tone will also be the most effective.

There's nothing audiences and readers like more then a good story. Or a few. Stories serve as great icebreakers, and also give your audience something to identify with, so that they have a context in which to view you. Great speakers, like great bloggers, always discuss some kind of transformational experience they had that was a turning point in their lives, and that's how we relate to them.

A little humor goes a long way, and it's not easy to do. The teachers I had were each humorous at times, in distinctly their own way. Audiences love to laugh, and giving them a story they can chuckle over fosters a stronger community as a whole. Humor is also a great equalizer.

Now that you've seen my yoga/blogger analysis in action, it's your turn. Any parallels from your own life you can draw upon? Does your yoga teacher inspired social media relevant thought?

This is an excellent story! As a long-time yoga student and professional journalist, I really appreciate how thoughtfully you illustrated these other skills that talented teachers everywhere offer. Namaste, Karen

Thanks, Karen. It's funny how I never had these observations before until I went to the conference, but these impressions suddenly added up. There seems to be a natural connection between blogging and yoga, and probably biking, blogging, and yoga.