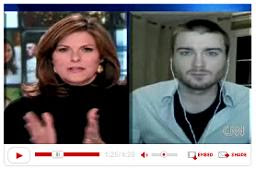 Mashable's Peter Cashmore was on CNN the other day discussing future technology trends for 2010.
The popularity of Facebook and Twitter will continue, he said, as will the importance of "location sharing," meaning there will be more immediacy in tweets and posts. Also popular will be the continued consolidation of devices with multiple capabilities (blackberry and Iphone, of course), with the exception of the Kindle, which is still considered a separate tool.

"No one thinks of reading on their phone at this point," he stated, forecasting the continued popularity of dedicated reading devices such as the Kindle.

What about the privacy issue? Facebook just last week revamped its privacy settings, and you can actually adjust most of them to reveal your data to "Just Friends," or "Everyone." I reset mine, and for the most part kept the settings I had had, knowing the social media is a fairly public arena.

"The only way to protect your privacy is to simply not post information you don't want made public," Cashmore stated. An obvious solution, and yet one which many still don't quite "get."

It will be interesting to see what next year brings in terms of the hot new technology trends. All we have to do is remember that a few years ago, no one had heard of Twitter, and even YouTube had not grown to the numbers it has today. My personal prediction is more customized interfaces and programs that automatically know personal preferences and profiles. I also predict more Twitter apps such as the recently launched Feedera, that summarize the daily Twitter highlights of your friends. Why? Because despite the evolution of Seismic Desktop, Tweetdeck, and others, I think there has yet to be a definitive Twitter aggregator, and the interface is too busy to go without.