How Do You Tell Your Story? Part 1 of 3 Part Series on Photo and Video Choices and Test-Runs 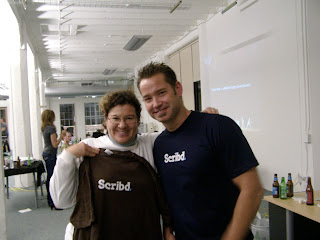 click here for video link or see embedded version below

Scenario 1 - Animoto for Effective (but not super fast) Video
If you're like me, maybe you come home from a great event where you took terrific photos and video, but you're not sure which format will work the best for you. Maybe you're all set to upload video, and hey, these days, YouTube is a fairly obvious choice, but you also realize your photos are really good, too. Whatever you choose, you should be aware that the format determines how your story will be received and the impression you create. There has been so much talk about the power of video, yet relatively little discussion on how to deliver it well.

In today's example, I chose to use YouTube via Animoto, the cool video shortcut program that is well known in the blogosphere, to highlight a terrific event I went to on November 20, the Start Up Crawl in SOMA (South San Francisco.) Visitors were bused in from Burlingame, where the Ruby on Rails Conference was wrapping up, to meet and greet with about 20 start ups, such as Justin.tv, Scribd, Shop It To Me, Engine Yard, Socialcast, etc. I met great people and nibbled on yummy hors d'oevres, (OK, I digress...) as we navigated the downtown streets to meet staffers and watch demos at these start ups, some of which I had heard of before and some of which were new to me.

I have written previously on how Animoto works, so I'm not going to dwell on that here. The purpose here is to compare 3 different methods and how the final product affects the audience and viewers, and also how much work is involved given each method.

I used about 30 photos to produce the Animoto above, which produced a 2 minute 30 second video. A free account only allows you 12 photos, or about a one-minute video, so you have to upgrade to the $30 a year version to get the premium account. An upgraded account also allows you to choose a faster or slower tempo for your video, and you can also order a High-Def version for an additional $5. The entire process, from uploading the photos, to choosing the music, to adding basic text and descriptions, and the final rendering of the video, took 1 1/2 hours. I was surprised it took that long, but I have of course made shorter videos that took about half the time, so be forwarned that anything over 12 photos could take longer then an hour by the time you choose the music, settings, and additional text. I tried the high-def version, but it took nearly half an hour to render, and would have taken up 20 megs of memory which I didn't want to download onto my laptop at that point.

Overall, I was pleased with how the video came out, and I feel it tells a story without detailed photo captions or backstory details. (That's coming up next post.) I could have added more text blocks, but I liked the flow of the images the way they were. I've always liked how Animoto allows you to spotlight certain images, and easily change the order by dragging the images to where you want them. I deliberately avoided mixing video segments in, since my previous experience experimenting with the video feature had taught me that is is fairly slow to render on Animoto, although in the interest of disclosure, I am on about a 3-year old iBook. Also, the soundtrack blocks out the sound on the video unless one does additional editing. So, I let the photos be photos--or, in this case, be video.

Let me know what you think....do the photos converted to video tell the story? Stay tuned for the next installment, where I will use the same photos to try out a Flickr slide show, experimenting with more detail and backstory. In the third and final post, I'll take a look at iMovie and the final result there. Popcorn, anyone?