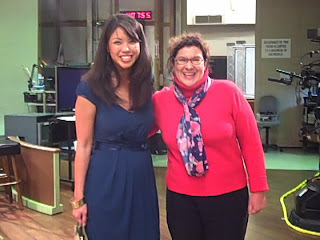 Last week I had the pleasure of being a guest during a taping of "View from the Bay," as my friend Jeff Hertzberg, doctor and bread baker, was promoting his excellent new quick bread books, "Artisan Bread in 5." Yay Jeff.

I had never really been to a live taping before, and was surprised at the degree of "organized spontaneity" that went on. I was also surprised at the aspects of the taping that were broken down for the audience, or deconstructed, as it were, and had a major lightbulb moment halfway through the show, when I realized the parallels between television and social media were too great to ignore. Here they are, with headlines in bold serving as the social media equivalents.

1. Establish the rules of engagement and commenting. Rachel, our hostess for the day, addressed us as we took our seats on set, and explained to us certain do's and dont's. It was OK to make woo woo or whooping noises, to express enthusiastic laughter, and to have excited reactions to things that happened during the show, provided they were timed appropriately. If anything we did was deemed inappropriate, we would be asked to leave. Yipes. Rachel showed us how to clap properly, and advised us not t0 look at the monitor no matter what, since that would look dorky to the audience at home. Understood.

2. The warm-up: Building Trust through Authenticity. A few minutes before the taping started, Janelle Wang and Spencer Christian, the hosts, came out and warmed up the audience by telling us jokes and conveying their warmth and friendliness, which they both were. They assured us how glad they were that we were there, and explained the logistics of things, so we would know what to expect. Amazing things, like robotic cameras that moved on their own like Robot from "Lost in Space, " and a somewhat invisible engineer who was looking down on us from above and making sure everything went smoothly. They even told us there would be really loud noises when set changes took place requiring the furniture being moved around, and yes, this proved to be true. I felt warmed up, warned, and ready. Trust had been established.

3. Offer samples and goodies, reward attentiveness, create insider exclusivity. Rachel came out often between the sets, and offered giveaways to those who remembered certain key details from the segments. This kept us all lively and attentive. It also made me/us feel special, like we were part of a club. Membership sites, anyone?

4. Genuine curiosity about others. The guests included a dermatologist, an organic cleaning expert, a journalist from Lonely Planet, and other travel experts. The hosts were great listeners! They listened to tips for hair shininess and saving money on Thanksgiving travel, and yes, baking bread in five minutes. And because they were so interested, I was interested as well, even if I wasn't concerned about these issues in particular.

5. Call to Action. There was a clear call to action at the end of the show. Go home and tell your friends about it. Come visit again. Buy souvenir t-shirts, and watch the show.

6. Publishing Gives us Clout. Over half the guests on the show had just published books or were contributing to books, so anyone who thinks publishing is not that big a deal, should think again. The takeaway message is clear: if you have limited time to market, focus on writing, and you can get media attention.

Any other parallels I missed?

Email ThisBlogThis!Share to TwitterShare to FacebookShare to Pinterest
Labels: artisan bread in 5, janelle wang, jeff hertzberg, the view from the bay