The Parable of the Tree 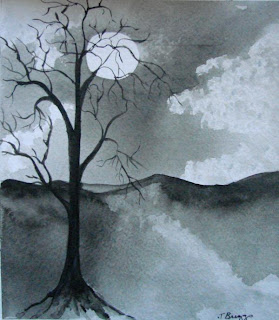 It was determined that the tree in front of our house needed to be taken down, as it was over 1o0 years old and had some perilous branches.

The workmen came on Thursday, and again on Friday, and sawed off many of the branches. It was really noisy, and we had to put on some Suzanne Vega just to help obscure the sound. I had gotten "Truth and Beauty" for my birthday, so we had great music at the ready, although you could still hear the steel hum of the saws in the background.

There was a lot of discussion. People stopped to look at what was going on, and wondered if there would be any part of the tree left. We said to ourselves, "if that tree could talk, I'm sure she would have lots of stories." We said, "It was probably all farmlands here, when that tree was first planted." No 7-11. No McDonalds.

The tree was left looking oddly unfinished, with half branches sticking out at strange angles, as if it were a homemade prop in a play. It looked unnatural, clearly resenting that man had messed with it.

The next day, the winds came up. Leaves swirled all around in clusters, shimmery and frantic, like schools of tiny brown fish. Clouds were stretched to thin whisps, with faint ridges, like the beginnings of ideas. Someone called the authorities, because they noticed that one of the tree branches was left exposed and dangling dangerously close to the power lines. Within minutes, the police came, and then the fire department, and the electric company. There was a situation. Then in a few minutes, the power went out. They had shut it off so they could tend to the repairs.

A woman ran out frantically into the street, concerned that her dinner roast was now ruined. I wondered what kind of roast she'd been cooking, a pot roast or maybe a rib eye, and also what kind of side dishes she was planning, and who all had been invited, not that it was any of my business.

We got out our lanterns, glad that we had them and could consider ourselves somewhat prepared for life's calamities. We noticed that they cast a strange orange light on the walls, as if we suddenly lived in a different place. We thought about perishables in the refrigerator, and whether we would have to buy new milk and eggs the next day. After several hours, we called the electric company, and their recordings seemed to know who we were rather readily. The recordings assured us that they knew about the problem, and that if we needed to get up early for work the next day, they would provide a wake up call. We found this humorous. The problem was scheduled to be fixed by 4 am.

It was so dark without the lantern that I couldn't sleep, so I read by its light for hours. The thought of it being too dark at night was strange, like water being too wet, or earth being too brown. Strangely unnerved, I started folding the clothes in my dresser drawers at 2 am by the light of the lantern, and I kept going to the window to look at the moon, opalescent and nearly full. I felt stupid doing something that didn't need to be done, since my clothes were already fairly neatly folded, and I had a lot of other things I needed to do, but somehow, this seemed like what I should be doing. I thought about what I might have watched on tv if the power had been on. Some late-night infomercials no doubt, illustrating handy mixers and magic vacuum cleaners, or maybe a special about Petaluma or Chefography, or child stars - where were they now. I realized I hadn't heard a word about Susan Dey in quite some time, and I missed the rainbow peacock logo from "The Patridge Family."

Life is little things and big things all mixed up, I thought to myself, and this is part of being human. The elements and details and incongruities and parallels don't naturally filter themselves into categories. You have to place them there. In your mind, in a photograph, on a piece of paper.

By 4 am, the power was back and made itself known, with all the appliances and clocks flashing for attention, as if a UFO had landed and sent strange electromagnetic signals all around. The familiar sounds of life returned --the hum of the refrigerator and the television, the glow of the hallway light through the front door, and the street light, illuminating the semi naked and unhappy tree, which had been further disfigured during this latest round of repairs.

We slept, and awoke by late morning. The sky was a brilliant azure blue, and there was a calmness in the air, as if we had been on a boat that had become becalmed, and was just drifting for a while. We went out to the 7-11 to replace the milk, touching the trunk of the tree as we walked by, as if it were a right of passage.