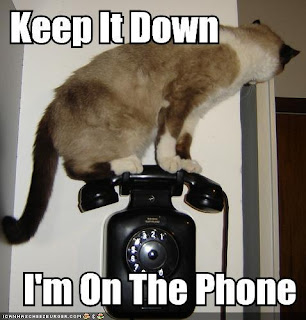 Today, I was excited about a teleconference call I had signed up for, with a coach whose web site and materials I had become familiar with over the last few weeks. After about 5 minutes into the call, I realized there were several marketing/communications problems going on, and not only was I disappointed, but I was surprised that someone who supposedly led her clients on the way to "6-figure incomes," really missed the boat. It was one of the few such events that I hung up on early (I never do this!), and instead of taking notes on great information as I usually did, I instead noted on what went wrong.

1. Antiquated technology.
It seems to me that the days of dialing in are really over. Maybe you, like me, have become accustomed to online sessions where you go to a URL, and not a phone number. When I typed in my pin #, an automated voice told me it was not recognized, and I had to redial and check in all over again.

2. No acknowledgement of audience/participants
On most of the calls/webinars I have been on recently, there is always a confirmation, even if in general terms, of the audience on the call. One I attended recently even had my name on file and knew I had logged into the seminar. Here, you could hear a lot of clicking as the speaker talked, and yet there was no confirmation of her audience at all. I found this very odd, given that she was talking about connecting with her customers!

3. Repetition of material.
It's understandable that one would reuse their content to a certain degree, but I was dismayed that the content on the call was exactly the same as that of 4 short videos I had just watched the week before. Why did the speaker/business owner assume I had not seen her videos? If she had organized or segmented her lists better, she would have been able to organize who had seen her videos already or not, and created different material. Or, to make it even easier, how about new material that no one had ever seen before?

4. The hard sell came, shall we say, fast?
If we've learned anything from social media, we've learned it's about relationships first, and business second. I was shocked that only 15 minutes into the call, the speaker was pretty much finished and had already started to attempt to convert her listeners (who she hadn't recognized earlier) into clients! To say this was rushed would be an understatement. So what did I do? I hung up. I don't think this is a sign of a good teleconference.

Lessons Learned
*Use current teleconferencing systems, such as webinars, and forget the dial-in, particularly if your brand is tied into being savvy and sophisticated.
*Recognize your audience, and get them involved by suggesting they introduce themselves and their businesses, ask questions, etc.
*Come up with new materials or don't do it.
*Don't start selling your solutions, products, etc. during the call, or at least wait until at least an hour has passed. Even better, send a follow-up email with an offer for free stuff and another webinar or video.