Woodstock.com Resources and Best Video of a Website I've Ever Seen 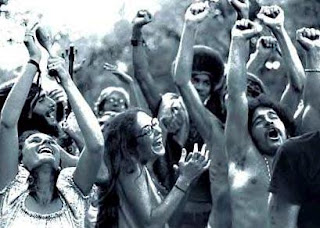 It's perhaps appropriate that I was in a "New York State of Mind" recently, given that my travels took me back to the east coast right around one of the most significant cultural events of our time: Woodstock and the 40th anniversary celebrations this weekend. I realized coming back to California, that it really doesn't matter where you live - whether it's upstate New York, or the midwest, the south, the northwest, the city or the country or the suburbs -- we are all united as Americans by our common experiences - what we live now, what we went through in the past, and what the future holds for us.

I remember watching Woodstock, the movie, in college. How ironic was it that something went wrong with the film projector. Segments of the film were fragmented, as well as skewed on the screen, reflecting the state of mind and the times it was filmed in, fragmented and skewed, but with the overiding attempt at unity. Despite all the glitches, we got the picture, and the film made an indelible mark in my mind. The sea of people covered in mud, images of couples embracing and forming circles, people clamoring for all the basic human needs in one place, at one time, loudly enough for the universe to hear: food, water, love, peace. And the music was mesmorizing: A Little Help from My Friends, Jefferson Airplane, Santana, The Who, Joan Baez...some of the best music ever written.

Ten years ago, for the 30th anniversary, my life was completely different then it is now, and I remember watching the anniversary celebrations on television and learning even more about Woodstock then I had already, including such ironies as the fact that Joni Mitchell, who wrote the famous festival song, was not even permitted by her agent to travel to the event, as she had to be back in time to appear on the Dick Cavett show.

We all wonder what we will be doing ten years from now, for the 50th anniversary, and how our lives will have changed. Just yesterday, it crossed my mind that there will someday be a time when no living Woodstock participant will remain to tell their story, and all we will have is the media imprint left behind: photos, film, books, recordings. Can you imagine if Woodstock had gone on today? The social media alone would have been enough to overload cyberspace.

So, in honor of the occasion, I gathered up some great online resources for Woodstock celebrations this weekend and beyond, in case you might want to catch up with any of the broadcasts that were done.

*Woodstock.com: A tribute to all things Woodstock, and by far the best video of a web site I've ever seen, (see home page), providing a great overview of all the web site features, including forums, shopping, photo and video links, Woodstock alumni pages, and tons more. This site blew me away, and the video is a great example of how to show off a new site. Of particular interest is a brief interview with Michael Lang, organizer of Woodstock.

AARP Bulletin Today (Aug 10th) - Online Bulletin from AARP:
Includes nearly 20 articles on various aspects of Woodstock, including slideshows, "Where Are They Now?",
implications for African-Americans, and more.

ABOUT.com - The New York Times
Woodstock weekend - what's going on at Bethel Woods Center for the Arts this weekend, site of the original Woodstock.

Where were you in 1969? Do you know anyone who was at Woodstock?