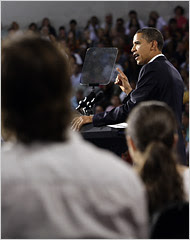 There was some controversy this week about Obama's Editorial about health care, which ran last Sunday. The story was covered well by Editor and Publisher.com. Originally, syndication fees were charged, until publisher complaints influenced the editors to release the article for no charge.

"The charging issue sparked a flurry of comments among members of the National Conference of Editorial Writers, including several who blogged about it on their Web sites," the article states.
"Editorial Page Editor Mark Mahoney of the Post-Star in Glens Falls, N.Y., wrote, You'd think the president of our country would want all of his constituents to have that information, in order to help them make a thoughtful decision on his health care plan. But apparently, that explanation isn't for all Americans -- just those who live in communities where their local newspapers are willing to pay for it. (We're not, by the way.)'"

The irony here of course is that here is an article promoting health care for those who needed it most, from the middle class on, and yet how can the communication be understood if the readership is limited? Isn't it like saying we should all get sandwiches for lunch, and then only providing them to those who already have the bread?

Maybe a social networking/Facebook approach would have worked better.

By the way, the letter is very good, but that's not the point. It brings to mind a larger issue from a journalistic standpoint:
*Should newspapers waive syndication depending on the author and content of the piece?
*Sometimes, syndicated articles are obvious, and sometimes not. Should there be a standard format for revealing this information?
*When should a letter to the editor be used as the primary communications vehicle (versus social media), or should both automatically be used?

What do you think?

To get the rapidly emerging non-newspaper reading majority to be informed by, and presumably from the President's point of view support what he stated in the op-ed piece on healthcare, you are correct, the content communicated virally through social media would likely achieve more support -- if the health plan was clear, which it is not. Perhaps the President and his team, known fro supposed social media prowess, did not go that route because they have not done a good and clear job explaining the benefits of healthcare reform at this time (said as a HUGE supporter of what many generally understand healthcare reform to be) -- leaving the door wide open to his opponents deploying all media better than he is, frankly, to trash it and scare many people inaccurately.

To whom much is given, much is expected. The US Presidency should be an "on message" (known as) bully pulpit, not "an academic exercise;" now given how uninformed President Bush prided himself (!) on being, some may feel President Obama is "refreshing," but he MUST "close the sale," and produce results. Otherwise, he runs a real risk of being regarded as that other widely acknowledged excellent ex-President who was frankly terrible in effectiveness while in office, Jimmy Carter.

Please, President Obama, do NOT enable your enemies -- and the enemies of sensible healthcare reform, by not "selling the sizzle with the steak." Whatever one thinks of them, both Presidents Clinton and Reagan definitely understood this about the all-important "bully pulpit."