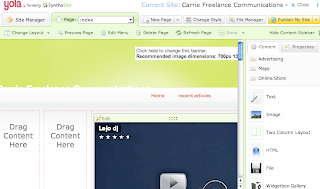 Despite talk of a "down attendance" at this year's web 2.o conference, the exhibit hall on April 1 was bustling with vendors and visitors, and it certainly seemed to this observer that a good time was had by all. That being said, I'm highlighting 3 unique start-ups that caught my interest, starting with Yola, in this post.
Yola (formerly SynthaSite)
I was shown a quick demo of this design your own web site program, which recently relaunched from another brand, SynthaSite. I am a perfect candidate for this software, as I am at a stage where I am trying to migrate my blog from Blogger (no offense, Google) and my site from Freewebs, a fairly decent auto editor program, into one combined nifty site. I was really excited about this program, since they had cool t-shirts, and the home page looked fairly easy, and there was a lot of buzz, including some recent heavy duty funding to the tune of 20 million dollars. I just spent about 40 minutes reviewing the basic features, and did go through the Basic tutorial. Here's my take:

Templates
The choice of templates is pretty good (38), although the Preview mode is a little awkward. You can't see the thumbnails unless you click on a design and there is a delay, so I found this a bit inefficient. I tried 3 different templates, typing in the name of my company, and the name got cut off each time and I couldn't figure out how to adjust the type to fit the space. I did, however, get a message that the banner size needed to be changed, with specific dimensions coming up, but it was confusing as to what that had to do with the type. The banner seemed to be referring to some other image that wasn't there. I tried uploading my butterfly logo, which ended up distorted, so I changed the dimensions and was rerouted directly to Picnik. So, the image worked better but was still cut off. Time to move on.

Widgets
How much do I love widgets? Very very much. They're spunky. They're cool. But here? Not so much. First, I tried the Skype widget. I typed in my Skype ID thinking all would be fine, but when I got the image, it said I was "offline," even though I always have Skype open on my desktop so I can, you know, get phone calls. Then I tried clicking on it to test call myself, and I got a window that said I had to download some software, and then nothing at all happened and no phone call. Hmm. Next, I tried the YouTube widget thinking I could niftily get my channel to show up. So, I got the You Tube home page, and when I copied and pasted the URL for my channel, nothing happened??? A blank screen. Very strange. Time to move on.

Search Engine Optimization?
I asked about this at the booth and the woman helping me was not sure about this. I found this a bit odd. I also checked on the home page, and nothing. Then I typed SEO on the Help menu and got nothing. Then, I spelled it out and got several results, mostly having to do with Google Analytics and some tips. Not bad, but what I really wanted to know was, how is the architecture of this software more optimized than any other, particularly in light of Word Press?

Some Other Awkward Moments

File Uploads: I was able to easily upload one of my recent articles with no problem. However, I could not easily discern how to add a caption. When I clicked on the Text function and dragged the box over to the area I wanted to type in, it defaulted to the area below the photo instead. When I typed "captions" in the help menu, I only got a link to Picasa web albums and slide shows. Also, when I wanted to edit the photo and move it to the left, there were 2 edit choices, one regular edit and one for Picnik. I chose regular edit and still got the Picnik window.

Web Page vs. Blog: I was surprised to have to choose between the 2 when first creating my page, given that the trend these days is toward the combined interface and in my case, that was my reason for wanting a new program to begin with.

As you can see, results on this software were very mixed. In the interest of fairness, I will give it another shot, however, being that the folks I met seemed to be trying hard and there were a lot of positive user testimonials. But I feel somewhat taxed from not getting what I wanted out of these features. It's not a good feeling to wonder if you might get more out of the t-shirt than the program.

Anyone else tried it?