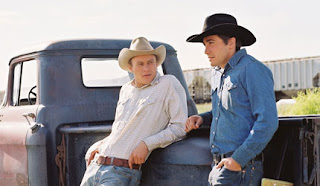 It was not the filming of an episode of "Law and Order," or some gritty film sequel...

It was hard enough reading about the circumstances of Heath Ledger's death yesterday, without the news of "groupies" hanging out outside his apartment, bringing their cameras and trying to include themselves in the tv news coverage, eagerly reporting friends that they had been on camera.

I had only seen Ledger in one movie, "Brokeback Mountain," in a performance I will never forget. He had all the right expressions of emotion in that film - fear, ruggedness, courage, in a delicate mix, and now we learn that in real life he was apparently even more fragile. Amidst all the drama surrounding this news, it was ironic to note that part of the story was the crowd of mourners, onlookers, observers, whatever you want to call them, surrounding Ledger's Soho apartment, and how so many news stories these days are about everyday citizens embedding themselves in the story. An observation on slate.com was made about this as well: "Noting that crowds have formed outside Ledger's Manhattan apartment, Sonia Zjawinski at Wired's Underwire writes that the state of our postmodern culture is tied to new technology: "Rubbernecking is a common reaction to tragedy, but this obsession with becoming a part of the story has increased since blogging and phonecams came into the picture. Citizen journalism is as much about embedding yourself in the news as it's about passing along the information."

Today's new media is not an excuse for the public to take on the story - we should respect those who have passed, and let ourselves take a back seat. There are plenty of other opportunities for you and I to be in the picture.