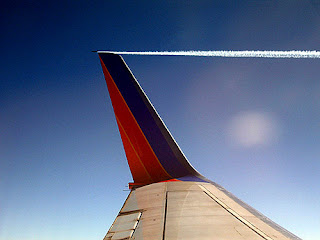 We flew to San Francisco in the middle of the bad storms last week, and it got me thinking....

We put our faith in entities outside of ourselves all the time. We go shopping at the supermarket, trusting that the food we buy will not make us sick or kill us, despite the rather alarming rate of recalls and health scares -- think last year's very scary and ironic "spinach" episodes. Wasn't spinach always the one thing we could count on to be good for us? Now, I don't eat it anymore. We drive around, hoping that other drivers will not do stupid things like drive ridiculously fast or slow, decide to look away from the road at a key moment, or drink too much, or turn without looking, not to mention signaling. We talk on our cell phones despite the warning about the dangerous signal emissions. We trust in doctors and machinery to alert us if we are fine, or if we have 1, or 5, or 10 years left to live. We trust that when we board a train it's not going to fall off a bridge or fly off the track. Similarly, we trust that when we get on a plane, we are at some point going to arrive at our destination, body parts and luggage intact. Yet there is something about flying - leaving the ground to rise 40,000 feet in the air, that truly requires a higher faith. After all, we are talking about leaving the ground. And what are planes but pieces of metal and steel, glass and turbos and bolts? When I was younger, I used to always sit by the window so I could stare out at the wing, finding reassurance that things were going the way they were supposed to. Flaps up after takeoff, flaps down before landing, landing gear up, landing gear down, engine staying attached to wings, etc. I don't know what I would have done if something had not gone the way it should - and that's exactly the point...there is nothing you can do.

We flew to San Francisco in the middle of the bad storms last week, and despite delays and many revised messages from the captain (who sounded like Kurt Russell) we made it, through many layers of fog and clouds, and wind gusts that caused my neatly measured cup of orange juice to go cascading onto the floor. It was one of the longest hours I've ever had. I tried to put on a brave front, clutching my husband's arm at the moments needed, pretending to myself and everyone else that I was fascinated by the miniature renditions of "The Office," and "Everybody Loves Raymond." I watched the faces of the flight attendants to see how calm they looked - a trick someone had taught me once. Well, they seemed OK. I flipped through "Sky Mall" and fantasized about having a do-it-yourself jacuzzi for a mere $800, hopefully in this lifetime. I perused the airline magazine, fixating on the map of the world and the measured black loops that marked the routes from here to there. Parameters and boundaries. Time zones and latitudes. Burlington Vermont and Birmingham, Alabama. France. Russia. The Arctic. Would I live to see all the places I wanted to visit in this world?

Finally, I felt the plane going down, flaps and landing gear engage. Reassurance from Kurt Russell. A tiny break in the fog that showed lights down below, a town, a highway, a vein of water. I shut my eyes as we touched down, and breathed a sigh of relief, realizing that I probably would have been strong enough to handle the whole thing better if I'd only been eating my spinach.