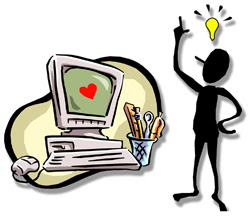 A recent New York Times article, "Putting Your Best Cyberface Forward," focused on the online personas we create through social networking pages such as Facebook, Myspace, and Match.com, and certain patterns that exist. For example, men typically include photos of themselves with their cars. Others frequently hide their age, or select specific aspects of themselves to highlight, which may be exaggerated. The notion of "electronic styling" is interesting. Younger individuals, in particular, may want to appear "cool," to their peers, while more serious and professional to employers, so they have to decide what works best.

"Indeed, today’s social networking and dating sites are “like impression management on steroids” said Joseph B. Walther, a professor of communication and telecommunication at Michigan State University. But because they are still new forms of communication, “people don’t have a very strong sense yet of what they’re doing or what the best practices are,” he said.

The article did not address blogs, or video blogs, which in many ways are social networking vehicles - expanded views on some aspect of the writer, or the writer's interests- and reveal even more than photos. Like many of us, I subscribe to several blogs. Most of them do not have photos associated with them, so I have no idea what the blogger looks like, not is this important to me. However, some of the blogs I receive do have a photo or video of the author, which is typically linked to their web site home page. On one home page, the writer has posted what I would consider an unflattering photo - the lighting is poor, and the person just plain looks depressed or exhausted - like he just got off a red-eye flight. In one blog entry, ironically, the writer even discussed this photo and all the fuss and planning that went into producing it - advice from marketing people, etc. Someone thought this was a good photo? Hmm....My conclusion was that the same image can look different to different people, but there should be certain overiding criteria.

There is another video blog I subscribe to, but I can't bring myself to sit through most of the posts, even though they are short. Why? Because the writer scares me! I feel a little silly saying it, but he used very intense close up shots, and reminds me of the character of a murderer I saw once in an old Hitchcock movie. So he could be talking about monetizing your blog or the price of apples in Alaska, and either way he scares the heck out of me. Fortunately, he includes a text version with his videos, which works much better for me.

Recently, I uploaded a video where a woman was discussing a new web site she had launched, including all the visitors it had received so far, future plans, etc. All that was great, but she looked exhausted, and at one point, even said so, commenting that she was aware that she did not resemble the glamour shots posted on her home page. She went on to talk about how tired she was and how it was the middle of the night, etc. I admire productivity, and understand the need to juggle in life, but for goodness sake, if you're going to go to all the trouble of video blogging, at least get some sleep first.

What is your online persona? What does your social networking page really say about you?