"Bee Movie" Not Worth the Buzz 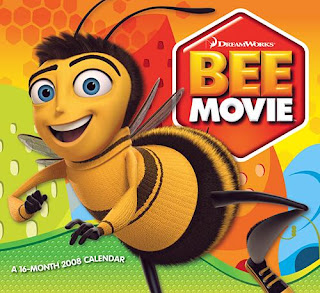 We "treated" ourselves to this film recently, thinking it would be a fun mix of adult and kids humor mixed in with some clever animation as well as some good old Jerry Seinfeld one-liners. The one-liners were certainly there, and the animation was pretty good too, but unfortunately the film suffered from a strange plot that fizzled as the movie went on. Perhaps the greatest lesson of this movie is that a clever pun in the title does not a clever movie make.

Seinfeld plays the lead voice for bumblebee (yes folks, a talking bee...get over it) "Barry Benson." Barry's best pal is the voice of Matthew Broderick, and his "love interest," if bees can have such as thing (I guess they can) is Renee Zelwegger as the shapely, attentive, and incredibly humane (don't squish that bee!) florist, Vanessa. Barry, who rebels against the single lifetime job at the honey factory, flees the hive, so to speak, and gets thrust into the world of humans. Learning the humans are "stealing" the bees' honey, (???) he sets out to make things right, and there is a funny but overlong courtroom drama, resulting in the lack of honey altogether, a stint at the Rosebowl Parade, a jet airliner unable to land in New York without the help of a flock of bees, etc. (Note: in light of 9/11, anything to do with airplane landings and losing control of airplane landings in New York is in particularly bad taste, even if it was 6 years ago. )

I found many of the scenes pretty upsetting even for adults like me, much less kids. There is a fair amount of violence, including poor Barry being smacked around on the side of a tennis ball, rained on, smushed by windshield wipers, and well, you get the idea. The only really winning scene in my view was a nod to "The Graduate," when Barry, newly in love with Vanessa, swims around in a sea of honey to drown out the nagging of his parents, much like Dustin Hoffman in the famous swimming pool scene. All's well that ends well, with honey being restored to the world (did we really care?) and Barry and Vanessa becoming creepy co- partners in love and work. What is the message of this movie? Don't give in to the status quo work world? Fight corruption and you'll get the girl/florist? Appreciate nature as it is a fleeting thing? Maybe none, or all of the above - I wasn't sure. But one thing is for sure - this film is beewildering.