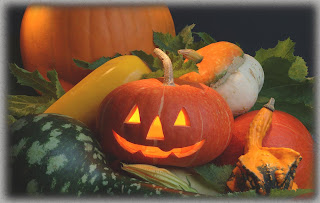 According to today's online issue of Gourmet Retailer, referencing an article in the Asbury Park Press and the National Retail Federation, the first official citywide celebration was in 1921, in Anoka, Minn. As much as $5 billion could be spent on Halloween this year in the U.S. That's a lot of candy corn!

Halloween Stats Look at Spending, Eating Patterns
According to an article in the Asbury Park Press, the Halloween season means it's time to take stock of American candy statistics: The first U.S. citywide Halloween celebration was in Anoka, Minn., in 1921, according to the U.S. Census. In 2006, more than 36 million trick-or-treaters ages 5 to 13 hit the streets, according to the Census, down 45,000 from 2005. Other statistics: Kids' favorite stops during trick-or-treating are homes that have "anything made with chocolate" (68%). Next were lollipops (9%), gummy candy (7%), and bubble gum or chewing gum (7%), according to the National Confectioners Association (NCA). 26 pounds: Amount of candy, per capita, consumed by Americans in 2006; it is believed a large portion is consumed around Halloween. Americans are expected to spend about $65 each at Halloween, according to the National Retail Federation (NRF): $23 on costumes, $20 on candy, $18 on decorations and $4 on greeting cards. Grand total spending could reach $5 billion this year.