Highlights from My InBox

Despite the fact the my in box in typically inundated with e-newsletters, promotions and the like, I am proud to say that I have honed it down a bit and preserved only those links I choose to receive, ranging from the literary and intellectual to food, fun, and entertainment categories. That being said, the latest roundup of news from today is the following: 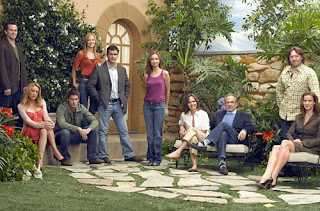 *For television fans, the new abc lineup of shows begins next week, including new episodes of "Grey's Anatomy," "Desperate Housewives," "Dancing with the Stars" (you didn't get enough last season?) and the Grey's Anatomy spinoff "Private Practice." My personal favorite is "Brothers and Sisters," not only because I am a big Sally Field fan, but because I think the scripts are well written for the most part, and the situations intriguing, despite the fact that there is always the end of eposide family formulaic "blow out" dinner, where whatever demons have been lurking throughout the episode are aired. This has been getting somewhat predictable. I'm not sure "Private Practice" will take off, because of the storyline focusing on such a specific clinical setting, although I do think Kate Walsh is a good actress, although she attempted too much in the pilot episode that aired last spring to be too "Ally Mcbeal" ish, particularly in the I'm talking to myself for an extended period of time elevator sequence. So get out the popcorn and fluff up those couch pillows!

*For food fans, I receive the Diet Detective newsletter several times a week, which features interesting food tips and interviews, mostly with fitness gurus and nutritionists. It was founded by Dr. Charles Platkin, a nutritionist and healthy food advocate. The latest newsletter featured a "healthy" chocolate, Gayle's Miracles Perfect Chocolate Truffles, only 30 calories and 1 gram of fat apiece. "We also thought it was neat that she uses figs and honey in the filling." OK, that works for me.

*I'm intrigued by "Loving Frank," the new novel by Nancy Horan based on the affair between Frank Lloyd Wright and Mamah Borthwick, and it tops my upcoming reading list. I learned a lot about the architect in a fantastic special that aired last summer on the history channel that highlighted his women, his careers ups and downs, and his unique skill and imagination. In the New York Times Book Review I receive each Friday, the reviewed states: "Loving Frank,” bringing the buried truths of the ill-starred relationship of Mamah Borthwick Cheney and Frank Lloyd Wright to light, Horan only increases her heroine’s mystery. Mamah Borthwick Cheney wasn’t just any woman, but Horan makes her into an enigmatic Everywoman — a symbol of both the freedoms women yearn to have and of the consequences that may await when they try to take them." Normally I'm not a fan of "reenactment" style books that take a cue from history and real lives, but in this case the architect's life is intriguing enough to be a soap opera in its own right. It looks like the author got the balance of real life and fiction just right, and kuddos to her for getting the dialogue right, according to reviews. I'll be reading on my own to see what I think, of course.