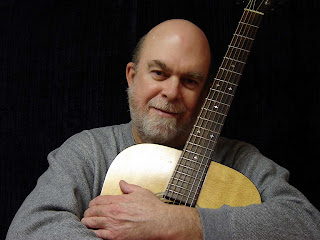 We got to know Derek Abbott's music through some music videos of his we stumbled onto on You Tube. We instantly grew enamored of his lyrical style and original interpretation of the classics, such as "All Gone to Look for America," "Norwegian Wood," "Close Your Eyes," and many others. In this interview, Derek talks about his musical influences, his inspiration for writing, and his thoughts on today's music, and his collaboration with - yes, you guessed it--(Matthew) Costello. Derek lives in Virginia with his wife Barbara, who is also a musician. Click on the links in this article to sample some of his music.

Q:You wrote in your bio about seeing The Beatles on Ed
Sullivan in 1964 and that was "it" for you. What was
it about the Beatles that inspired you so much, and
what do you think the greatest influence of the
Beatles is on today's music?
A: I was well into music before 1964, having grown up in a household where my dad was a music lover and played his records all the time. So I appreciated the music of the 30's and 40's through him. We also had the radio tuned to the contemporary popular station of the time that played the hits of the day. I was born at the end of 1951, so I grew up listening to all the musicians who were actually creating a new sound, a combination of musical styles that disc jockey Alan Freed coined "Rock and Roll." Many of these early rock and roll pioneers influenced not only me, but the whole world, of course. Elvis and the other Sun Record artists were among the pioneers of this new sound. The Beatles were being influenced by the early artists of rock and roll as well. They took their influences and combined them with their own creativity to produce a fresh, new sound that opened up a whole new world in the music industry. Their early records contained cover songs of some American artists like Chuck Berry and Smokey Robinson, but they were also writing most of their material even from their first album. Their harmonies were influenced by the Everly Brothers, and they put a new twist on it by adding a third part. At the time the Beatles came out there was nothing like them. Their sound, their look, their personalities and mass appeal, were phenomenal.
As a 12 year-old kid with an interest and background in music already, seeing the Beatles perform on the Ed Sullivan show lit the spark that became my creative desire--I wanted to play music and sing and have a band and write songs. It was the beginning of an era in modern pop music that would take rock and roll to its greatest heights. And as the Beatles progressed through the years, they were the innovators, setting the standard for all who followed. I think that's why they have such appeal and influence on many new artists of every generation that comes along. I feel so fortunate to have been a part of that era...to have grown with them from the time they took America and the world by storm. Hundreds of years from now when most of todays artists are long forgotten, there will be the Beatles. Their music and their legend will live forever.


Q: What would you say most of your songs are about,
and how do you go about the process of writing; that
is, do you think of the tune first, or the lyrics, or
does it depend?
A: Some of my songs were written about real life experiences. Others incorporate fantasy or dreams into the lyrics. Some are just little stories with music. The process of writing for me can vary. When I am lucky, a song will find its way to me and I'm able to capture it before it moves on. Music and lyrics and melody all come together as a package , so to speak, and if I'm able to record it all before it moves on, then I have received a wonderful gift. This doesn't happen often, but when it does, I feel these are my best songs. Otherwise, some of my writing will start with a musical idea, a chord progression or riff and build from there. The lyrics will come from how the music makes me feel. Or, sometimes I'll have an idea for a song lyrically and start writing and then find the music to fit later. I have a notebook full of lyrics with no music and a lot of instrumental chord progressions with no lyrics. Sometimes a song is started and not completed until years later. And then there are many ideas just never develop into complete songs.

Q: Have you performed concerts in public, and if so what has been your greatest performance so far?
A: I started performing after learning enough chords to play a few songs. My first band performed at school dances and parties and as I grew as a musician and as time went on I performed with other musicians doing acoustic duos. After several bands and many years I ended up back with an old friend playing as an acoustic duo again, which is my favorite combination. Two guitars and two voices in harmony. It's a very intimate relationship and very rewarding. I have rarely performed in public since 1999, other than an occasional get together with friends or at a party. I have many great memories, but if I had to pick one, it would be from New Year's Eve 1980. John Lennon had just been murdered, and my band was playing to a packed house. As a tribute to one my great influences in life and music, I performed a solo acoustic version of "Imagine." It was a very moving and emotional moment...I get chills just thinking about it.

Q: Do you have plans to produce a CD?
A: Matthew Costello and I have been collaborating together since the early 80's, and he has developed this website which streams our catalog of songs in a player, but is not available to download. We are considering options for making cd's available through the website, hopefully in the near future.

Q:Tell me about your collaboration with Costello.
A: We were introduced by a mutual friend at a party. My friend had played Matthew a tape of a couple of my songs and he liked what I was doing, so we decided to get together and try things out. We clicked immediately, and wrote and recorded our first song the first day we got together. We have been working together ever since. The writing process varies from song to song. He has taught me a lot about songwriting and his knowledge of studio production is impressive. He is an excellent singer/songwriter/musician in his own right and I am fortunate that fate has brought us together.

Q: On your web site you mention a lot of your early inspirations...Peter Paul & Mary, Dylan, the Byrds...etc. What musicians do you look up to today, and why?
A: The artists who inspired me early in my musical journey continue to inspire me today. I have great respect for the artists who are 60+ years old that are still out there and doing so well. Paul McCartney of course is a great inspiration... at his age he is still performing and sounding awesome. Another example is John Fogerty of "CCR" fame. I saw him perform last summer and he just blew me away. I think Norah Jones is very talented and unique. "Nickel Creek" are also some talented young artists. I have recently started a Myspace Music site where I have met bands that are writing some really good music. Most noteably are a couple of guys from Dublin--Mick McDonnell and Steve Cranley, who go by the name "Sundrive." They have released two singles and their first cd is to be released any day now. I think they have what it takes to make it, and I hope they enjoy worldwide success.

Q: Would you describe your music as "acoustic folk,"
and what do you think the future of this genre is?
A: Yes, acoustic folk describes a lot of my writing, but some of the songs that Matthew and I write together fall into a different category. We've written raggae, rock and roll, ballads, and some compositions that are hard to label. I think that acoustic folk music will be around as long as they are still building guitars. It is the easiest way to express yourself musically...you and your guitar.

Q: What additional hobbies and interests do you have, and do you play music full-time?
A: I only spent a short period as a full-time musician in my younger days. The starving artist thing got old quickly, and I resorted back to the real working world to pay the bills. I'm also interested in photography and I love to cook.