Days of Heaven Upon the Earth 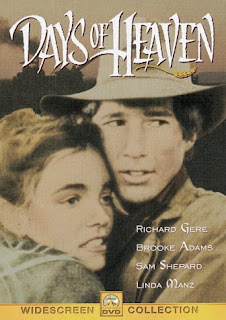 Every once in a while, I think about my favorite things. Perhaps it's a corny Julie Andrews kind of thing, but let's face it, thinking about our favorite things makes us feel better, or we wouldn't do it. I have my favorite books, favorite ice cream, favorite places to visit, and of course, favorite people. In the category of favorite movies, there is Terrence Malick's 1978 classic that has always stayed with me, ever since I first saw it in the movie theatre. Few movies I have ever seen since have impressed me the way this film did, in all categories: writing, acting, cinematography...and I would venture to say that few in the future will touch me the same way. The film is a feast of the sensations, so if you have not seen it, you absolutely must do it soon.

The film was shot in Alberta during a 2 year period, and takes place in what's meant to be the Texas Panhandle in 1916. A wealthy, lonely, land-owning, raw-boned farmer (Shepard in his acting debut) of the Great Plains falls in love with the girlfriend (Adams) of a hot-headed wheat-field worker (Gere), who is masquerading as the field hand's sister. The 'heavenly,' golden-hued, contented, and idyllic days of the drifters, who have found salvation on the wheat farm, are shattered with the discovered revelation of the real nature of the relationship between the brother and sister, and an accompanying plague of locusts and fire (typical of Old Testament judgments). Scheming deception, greedy avarice, jealous envy, adultery, and eventually murder result from the conflict. The voice-over narration of Bill's young sister Linda (Linda Manz) punctuates the film with the tender and poignant observations of a teenager, seeing things in a way only a teenager would, and slightly muffling the enormous passions between the characters in the film, but providing the viewer with something of a safe haven as well.

The story has numerous allusions to the Old Testament, particularly to the Book of Genesis. The title is from Deuteronomy 11:21: "That your days may be multiplied, and the days of your children, in the land which the Lord swore unto your fathers to give them, as the days of heaven upon the earth."

The film won an academy award for best cinematography. Although Malick disappeared for years, to the point where he was even reported dead or missing, he has resurfaced and is now back at work, with two projects, "The Thin Red Line,'' with Sean Penn, and "The Moviegoer,'' with Tim Robbins and Julia Roberts.