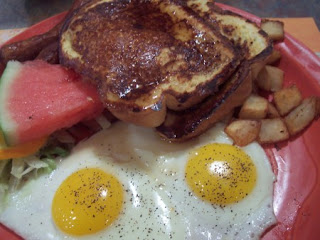 I have never been a big fan of breakfast. Growing up, I remember swigging down huge glasses of Nestle's Quick or Bosco - in other words- pure chocolate and sugar, in grade school. OK, it was fun making swirly patterns in the milk with the layers of chocolate, but get real...is it worth paying the price in high tryglicerides now? Not to mention the "low" that comes directly after a sugar buzz. In high school, I remember discovering the high calorie, high fat world of the Egg McMuffin, complete with hash browns, as well as...dare I say it...canned roast beef/corned beef hash. During college and for most of my adult life, there were occasional forays into healthy diversions (fruit salad, granola, yogurt, etc.) but I always lapsed back into cravings for cheese Danish, chocolate muffins, and- dare I confess- Sarah Lee chocolate swirl poundcake...by the container! Now, after reading enough articles and e-mails on the importance of a healthy breakfast, and out of a purely selfish desire on my part to enjoy my 40's and beyond, I have discovered some great tips to cut calories at breakfast and still not feel deprived. My star recipe in this endeavor is...The Breakfast Club! This consists of a low fat English Muffin, a slice of Canadian Bacon, a layer of egg white, and a sprinkling of low fat cheese - any kind you like. I don't know the calorie count since I'm not a dietician, but this meal is satisfying, and cuts out butter, high fat cheese, cholesterol, and other nasties.
Other healthy breakfast concoctions:
*Carrie's Tropical Smoothie: 1 banana, 1/2 cup chocolate soy milk, 1 tablespoon frozen orange juice concentrate, 1 tablespoon peanut butter, 2 tablespoons lowfat vanilla yogurt. Mix in blended until all ingredients combined...yummo! (note, you can add various fruits to this, such as strawberries, blueberries, sliced mango, or papaya.)
*Carrie's Oatmeal Odyssey: make a cup of your favorite oatmeal, but make sure it's the plain oatmeal without added sugar. Add a splash of milk to make it creamy, and then sprinkle cinnamon, fresh fruit, and dried fruit such as dried cranberries or raisins to sweeten naturally. You won't miss the sugar.(For a special treat, add a dash of vanilla extract).
*Carrie's Breakfast Parfait: Find yourself a chic dessert glass, which may temporarily help you fool yourself into thinking you're eating ice cream. Start with a layer of granola or healthy cereal. Add a few spoonfuls of plain yogurt, and top that with a layer of whatever fruit you like. Continue in layers until you've reached the rim of the glass. Sprinkle the top with cinnamon and some coconut flakes or toasted almond flakes...and voila!

Note: I was at a health spa once and met with a nutritionist briefly. I told her I was going through a phase where I was craving Ben and Jerry's Chocolate Fudge Brownie ice cream literally every day. She acted like she had heard this kind of thing before, and suggested I eat it at breakfast. In this way, at least I would work it off during the course of the day. Since this advice came from a certified nutritionist, I allow myself to modify any of the above recipes with a dolllop of the Ben and Jerry's of my choice, just to get it out of my system. You can do the same, and let me know how it goes.

Additional Note: I once told my doctor I was having intense sugar cravings. He suggested I take chromium. I filled the prescription, took a pill, and within 20 minutes turned as red as a lobster. It took about 10 hours to return to normal again. I threw out the pills and, once my coloring returned, treated to myself to a pint of you know what. All this made the cravings not so bad....

Email ThisBlogThis!Share to TwitterShare to FacebookShare to Pinterest
Labels: Other