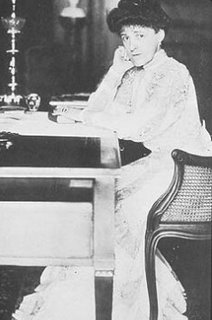 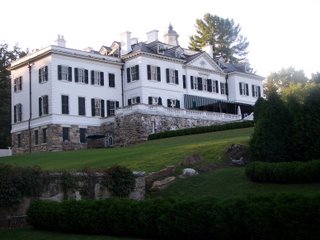 In August during our Berkshires trip, we spent a day visiting Edith Wharton's home for ten years, The Mount, in Lenox, MA. The place was fascinating, and we went on a tour of all the rooms as we heard about her difficult yet colorful life - her estrangement from her husband which ultimately led to her divorce and her need to move to Paris as a result of the loss of her social status...her unique decorating ideas which were incredibly innovative for the times, both then and now....her extensive publications....her close frienship with Henry James...and the bravery with which she lived her life. What does all this have to do with Halloween? Well, at the end of our tour, we were treated to a live reading of a short story Wharton published in 1916 with Scribner's magazine, called "Kerfol." Yipes! Complete with howling dogs, haunted house, a trial, a gruesome murder, a creepy husband, and other juicy tidbits, this was by far the scariest ghost story I have ever heard in my life. It's right up there with Edgar Allen Poe's "The Tell Tale Heart," which has "haunted" me for years. If you really want to sit down to a scary read for Halloween, get hold of this short story and read it in one sitting...but make sure you're not home alone. 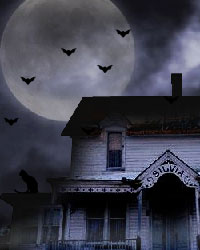 Here's a taste of the story: "The very year after the little brown dog was brought to Kerfol, Yves de Cornault, one winter night, was found dead at the head of a narrow flight of stairs leading down from his wife's rooms to a door opening on the court. It was his wife who found him and gave the alarm, so distracted, poor wretch, with fear and horror -- for his blood was all over her -- that at first the roused household could not make out what she was saying, and thought she had gone suddenly mad. But there, sure enough, at the top of the stairs lay her husband, stone dead, and head foremost, the blood from his wounds dripping down to the steps below him. He had been dreadfully scratched and gashed about the face and throat, as if with a dull weapon; and one of his legs had a deep tear in it which had cut an artery, and probably caused his death. But how did he come there, and who had murdered him?"

Some of My Favorite Quotes by Edith Wharton:

"There are two ways of spreading light: to be the candle or the mirror that reflects it."

"If we'd stop trying to be happy we could have a pretty good time."

"True originality consists not in a new manner but in a new vision."