It's Not About the Pumpkin 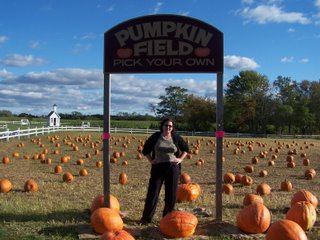 Before I decided what I was going to write about tonight, I thought briefly about writing on pumpkins, since it is fall after all, and I had this cool photo taken recently of me in a pumpkin patch - a rare occurrence -- and I recently came across some cool pumpkins factoids, such as the following:
*pumpkins can range in size from one pound to over 1000 pounds
*pumpkins contain potassium and vitamin A
*pumpkins are 90% water
*native americans flattened strips of pumpkin to make mats
*Antarctica is the only continent where pumpkins don't grow...

I could go on and on...but I won't. Because what I really wanted to say is that before sitting down to write, I looked at what a few other bloggers were writing about. In southern California, a honeymoon couple was documenting their hikes in the woods. In Missouri, a man wrote about missing his wife who was off at a friend's wedding, and about how an old soccer injury was hurting his leg. In Massachusetts, a woman wrote about how much she loved photographing kids, and her blog was full of the most amazing kid and baby photos I've ever seen. And in Texas, a man was complaining about his job as a litigator and how he had a two- hour commute and was supposed to be working from home one day a week but that wasn't working out since his days were so busy.

Most people write about what they love or hate, with the occasional foray into what they might be lukewarm on. In short, we are driven by our passions, be they good or bad. So while I may have feelings about pumpkins, and like them enough to write a few lines about them and get my photo taken in a pumpkin patch, and even recite a few interesting factoids, it's really not about the pumpkin. It's about the photographer in Missouri and the honeymoon couple in California, and the disgruntled lawyer in Texas. They have me thinking that during the time it takes to write this, another photo has been taken, another hour spent commuting, another step up the side of a mountain. And somewhere, someone on the planet is writing about pumpkins like me, which in may ways is more interesting then the pumpkins itself. Even if you consider that the largest pumpkin pie ever made weighed over 350 pounds and took six hours to bake. But who's counting.