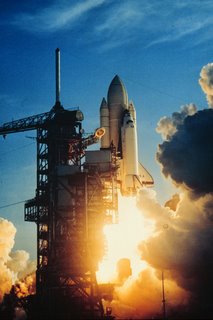 It's great to explore new frontiers. But I'm sure I'm not the only one who has noticed we have a lot of problems here on earth: famine, poverty, diseases and epidemics, the threat of terrorism, hurricanes and natural disasters, global warming, crime, etc. You get the idea. So it was with trepidation and more emotion then I expected that I watched the July 4th launch of the Space Shuttle. Let's face it, whether we feel the money could be better spent somewhere else (as in planet Earth) or not, when a launch takes place, there is a certain thrill in watching things happen the way they are supposed to for a change- the soaring of the rockets against the steel blue sky, the release of the boosters, those moments where you clench your hands and hold your breath, grateful for what you're not seeing - a giant ball of flames, reminders of disastrous past missions. I breathed a sigh of relief as the shuttle made in officially into space. But then there were the scary headlines last night and this morning, warning that there could still be trouble ahead, mostly due to those perilous chunks of fallen foam insulation, shown in closeup on the news to resemble the styrofoam you get in your morning cup of coffee. Warnings that the Shuttle should not even have taken off until the problem of the foam had been resolved. There were deadlines, budgets, timelines and schedules at stake, and seemingly, more important then human lives. How ironic it is that in this age of advanced technology, where astronauts can space walk and live in spacestations, and tiny cameras mounted on the shuttle can reveal the slightest dent and crevice, the fate of the Shuttle crew depends upon something so seemingly mundane as foam?

I have an idea. Let's keep the styrofoam for our morning coffee and scrap the shuttle program until NASA can figure out a way to make the stuff stay on the way it's supposed to. The Shuttle Program is supposed to end in 2010 anyway, and there has been enough bad press about the program being outdated as it is. Whether the current mission ends successfully or not, and of course we hope it does for everyone's sake, the Shuttle Program has already done more harm then good, with the explosion of the Challenger in 1986, and more recently the Columbia disaster. On July 4th, we eat hot dogs and watch fireworks and wave the American flag, because we are proud of a country that moves forward when it is ready, not when a schedule says it should. Heaven can wait.