A Milestone for My Mazda 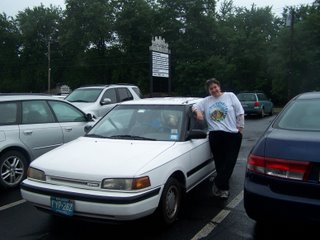 Last weekend was an historical occasion, as my car, a 1990 white 323 Mazda hatchback, (yes, the car is 16 years old), hit the 60,000 mile mark. In honor of this occasion, I cleaned her inside and out, gave her a light polish, and vacummed her thoroughly. I also emptied out the clutter that had accumulated in the back, leaving only lifesaving items, like emergency water, a roadside safety kit, a first aid kit, a flashlight, a small Clinique moisturizer with SPF, and a chocolate chip granola bar in the glove compartment, because - hey, you never know. While cleaning, I came across a multitude of maps - maps of the entire U.S., maps of cities and towns, some of which I had been to, some of which I hadn't. Not knowing what to do with them, I left them tied together in a bag in the back.

You might think I don't drive much, as some people hit that mileage within a few years, or less. In fact, there was an eight-year period when I lived in Hoboken and didn't need to drive so much, and the car pretty much sat there, waiting for a weekend jaunt on the expressway or maybe a spin out to the Stop-N-Shop. Anyone who has ever lived in Hoboken knows you really don't need a car there, that's why it's called the Mile Square City. Still, I felt guilty. "Drive Me!" she called out to me, whenever I walked past her in the parking lot. But the truth is, we don't always have somewhere to go. And yet again, sometimes we have to be everywhere at once. Kind of like life.

In the time that I've owned my car, I have driven all over New Jersey and Long Island, as far north as Portland, Maine, as far south as Virginia Beach, and as far west as Ohio. I know the New Jersey Turnpike and the Long Island Expressway like the back of my hand. I drove to my college roomate's wedding in Washington, DC, and to my own wedding upstate. I have driven to dinner parties, movies, plays, blind dates, running races, supermarkets, college reunions, shopping malls, toward things and away from things. I have driven alone, and with friends, through floods and hailstorms, heat waves and snowstorms. I have talked to my car, sung in my car (preferred artists include Tom Petty, Mary Chapin Carpenter, and Crosby Stills & Nash), eaten burgers and milkshakes in my car, argued, made up, and fallen in love in my car. I have pondered life decisions in my car, as well as the meaning of existence, not to mention the Molly Pitcher Service Station at Exit 8 of the Turnpike. Are we supposed to know who this is?? I have also spent many an hour on the open road, thinking about absolutely nothing.

The car has had her ups and downs over the years, just like people do - a broken suspension here, a troublesome clutch there, but all in all, she has hung tough. She looks spiffy, thanks to a recent new paint job and especially snazzy racing stripes I couldn't resist. I know one day the catalytic converter will go, and that will probably mean the end, but until then, here's to my Mazda and all the joy she had brought me. The upcoming summer weekends hold the promise of many an outing, and I'm pretty sure I know where I'm going. Still, it's nice to know the extra maps are in the back, just in case.

My car is also a '90 but has 84 thousand miles. During the early part of our relationship, I had multiple cars so this one got little use. I've found a great thing about having the same car for an extended time: I no longer have to look in the owner's manual to reset the clock in accordance with the 'saving time' law! Makes me feel so wise!

That's interesting, thanks for your comments. Wow, that's a lot of mileage!